In the last post, the SoCal family gathered to see Daniel graduate.  This time around, it's Daniel's wife Steffi who is excited to graduate. One year after the last Wilson graduation, Steffi finished her last two classes and graduated from The Master's College with a B.S. in Computer Science.  She is excited to have more free time to do more rock climbing at a local gym, crochet, and learn more about computer programming.  She has been working full time at TMC for the last year and will continue with the same job.
Posted by Daniel at 6/07/2014 10:12:00 AM 1 comment:

On Friday, May 10, many family members, from Daniel's Peterson side, gathered for Daniel Wilson's commencement event located at the College of the Canyons stadium in Santa Clarita, CA. Daniel received a Bachelor of Arts in Biblical Studies: Biblical Languages from the Master's College in Santa Clarita, CA.

Glen sang with an octet at Whittier Area Community Church for four services Saturday night, March 23 (1 service) and Sunday morning, March 24 (3 services) for Palm Sunday. He and seven other men sang a song called He Is, accompanied by the choir and orchestra. It was great!

Cindi worked as Assistant Video Director with the Video Director and camera crew to get the right shots to communicate the action on video and the web. In this role, she talks on a headset to tell the camera guys who sings next so they can set up the shot and the video director calls on various cameras to capture the moment. The video turned out well, too.

If you'd like to watch and listen, here is the video. The song starts at approximately 44:00 minutes in. If you hover over the bottom of the video, you'll see a bar that tells how far along the video is. If you click on the bar and hold down, a little hand will appear and you can drag the hand to the right to move the video to the proper time. I hope that makes sense.

A few members of the family left for OH yesterday for my Great-Uncle Donald Davis's memorial service which is today.

His obituary may be found here. Here is the first paragraph:

This is a great short film of quite an endeavor to move The Endeavor to its new home at the California Science Center. What an exciting time for the city of Los Angeles. We have tickets to view the shuttle on November 4th at the science center. Can't wait!

Chance of a Lifetime for a Space Geek

On Friday, Glen and I watched the Space Shuttle Endeavor pass by on a 747 from Long Beach, CA on its way to LAX. I was thrilled and touched. It was fun to be with masses of people all excited to see this historic technology fly by. An amazing moment. An amazing scene. I had arrived about 9:45 and waited until around 12:30. This video is exactly what I saw from my vantage point outside the Queen Mary. In fact, from the ground shots included, this photographer must have been standing very close to me.

I had a great time...until I tried to leave the parking lot. People had parked in red zone, double parked, and maxxed out the lot. No one could move. Meanwhile no one closed the parking lot, so visitors to the Queen Mary continued to pour in to the parking lot after the event and add to the chaos. I pulled my car back in to the nearest spot I could find, getting out of the stopped line of cars where I'd sat with my engine off for 20-minutes.

I went into the Queen Mary for lunch and to wait. Traffic was jammed for 2-hours. I sat outside in view of the parking lot from an upper level vantage point and watched cars in every lane not moving. About 2:45, I headed to my car and got home around 4:00, exhausted and frustrated. I talked to the front desk of the Queen Mary hotel and explained I was willing to pay the $5 but unwilling to pay a higher parking fee simply because I was unable to get out of the parking lot in a timely fashion. My contact at the desk gave me a room key to get out of the parking lot for free. That was a nice gesture. No, it was not activated to unlock a room -- or I certainly would have gone in for a nap to wake up after this nightmare.

Another lady wrote this comment on Yelp. I appreciate the fact that I was not the only one wondering where the parking lot management was on Friday afternoon. From what she said, they made a killing at $15/car and I got wonderful understanding from the hotel staff by getting the room key to park for free. Here is what she wrote:

"Enjoyed watching the space shuttle about one hour later.   Time to go home.........then the nightmare begins. The parking lot was full.   I guess to be expected considering all the exhibits and the Space Shuttle.   Everyone seemed to be leaving at the same time.   Nobody thought in advance to collect the parking fee upon entering the lot.  What happened was what appeared to be thousands of people trying to leave the lot at the same time and having to pay on the way out.  This uncalled for traffic jam left all of us sitting in our cars for over one hour without moving at all.  A complete gridlock.   People were honking, yelling,  walking around just angry.   It took one hour before someone took control and had employees start directing traffic and collecting the parking fees way in advance of the gate.  I could only thank God that this were not an emergency situation.  I am also offended that after such a huge screwup on the part of parking management, they still insisted on collecting their $15.   Why didn't you just open the _ _ _ _  gates and let these people out? An extremely poor ending to a very nice day."
Posted by Cindi Pete' at 9/23/2012 09:01:00 PM 1 comment:

Glen & Cindi spent a week on vacation, visiting South Dakota, North Dakota, and taking Amtrak from Minot, ND to Seattle, WA. These photos are from Minot's Scandinavian Heritage Park, featuring buildings and statues and fountains that are tributes to various Scandinavian countries. It was in the 90's that day, so we rushed through in honor of the Peterson Swedish heritage, and the fact that there wasn't much else to do in Minot. 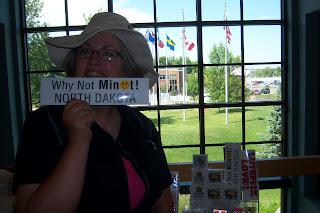 Petersons at the wedding 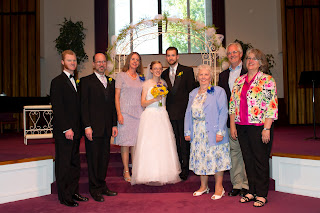 Uncle Brad Peters sent Steffi and me his DVDs of pictures from the wedding.  Before we get them all processed on our side of things, here's a picture of all the Petersons who were present. 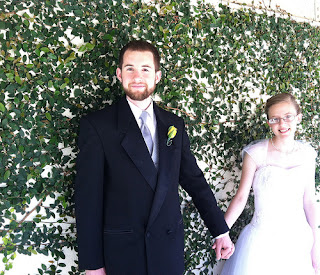 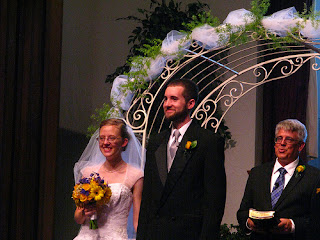 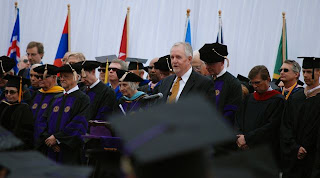 A student took this photo of me at Whittier College Commencement ceremonies where I was invited to pray the invocation including the Quaker moment of silence last week. It was a great day to see some of the students who became friends and meet their parents. President Herzberger said some very nice things about me. Cindi and I got to eat dinner at Wardman House, Whittier College President's residence the evening before.
Posted by Glen Peterson at 5/17/2012 12:27:00 PM No comments: 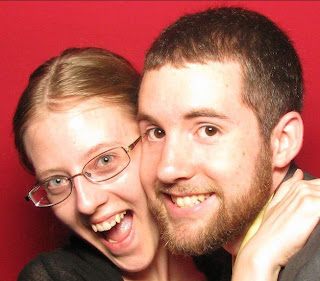 Welcome to the blog, Steffi! We were getting a little bland and needed you to spice up the blog. Since you'll be changing your name, we won't need to change the title of the blog to include Hydanus (unless everyone wants to see the whole family's incorporation to the blog).